Kooikers were (and some still are) used to lure ducks down a covered canal into a trap (called a kooi – thus their name!). The canal (called a pijp = pipe) is dug off the side of a duck pond, and is curved so the end is not visible to the ducks. It is covered with netting and flanked by tall solid screens arranged so that to the ducks, it looks like solid walls on either side, but in reality the screens are separated to allow the dogs to move between them. The entire setup is referred to as an eendenkooi (literally, “duck-cage”). The dog’s job is to follow their boss’ silent commands and weave slowly in and out of the screens. The appearance and reappearance of the non-threatening but potentially concerning small dog (with requisite highly visible plumed tail) causes the ducks to follow the dog’s progress down the pijp. Once they near the end of the pijp, the boss (/hunter) steps out from behind the screens and flushes the ducks up, where they hit the netting that covers the canal, and they fall into the trap at the end. The dog’s duck-luring behavior is usually called “tolling” in English (from Middle English “tollen” meaning to draw or to entice). 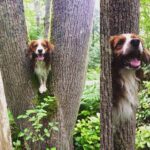 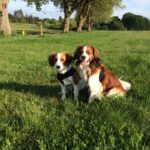 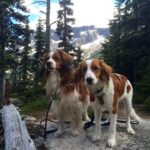 Most kooikers are many, many generations removed from ancestors that worked an eendenkooi. There are a few active eendenkoois in the Netherlands and one in England, but catching ducks this way no longer provides a livelihood for a hunter, so most have been demolished or fallen into disrepair. There are definitely none in the United States.

However, after visiting the eendenkooi in Friesland above, I became very interested in seeing if I could train the basic behaviors of tolling. I am always fascinated watching any dog perform their original job, and I wanted to see what I could create that would allow my kooikers to demonstrate the tolling behavior (and perhaps start on a journey towards a standardized tolling aptitude test for the breed someday??).

Most of the feendenkooi is visible in this picture

I’ve tried two types of screens, seen above. The ones on the right side of the picture (the convex side of the “water”) are bamboo privacy screens. They came from the garden department at Home Depot and were $10 for a 4′ x 10′ section. Due to the aforementioned need for the dogs to be visible, I cut them in half lengthwise so they are 2′ x 10′, which is just taller than the dogs. They are secured with gardening stakes zip-tied to the ends and some in the middle, as they do sag/bow out. To improve them in the future I plan to create rigid  tops made of 5′ lightweight wood strips.

The left-hand screens on the concave side are a second experiment. They are made of 3′ rebar stakes at either end with burlap stretched between them and zip-tied into place.

Placement of the screens on the feendenkooi is approximate to account for space (the whole thing is bent more than the original pijp would have been) but the angle of the screens to the water should be such that a duck facing forward would only ever see a solid line of screen material, and not the gaps in between.

I admit I have yet to nail down the best way to fake the water. The biggest consideration for the “water” is that it has to have a different texture than the surrounding grass so the dogs can easily distinguish that it is off-limits. I considered many options and experimented with designating the “water” area using a running hose and various materials. I do believe that the best way to accomplish this would be to dig an actual trench a few inches deep and line it with pond liner (or even a long slip and slide) but this was more invasive than I wanted to go. Eventually I ended up using tarps. It’s possible to lift the sides an inch or two by putting something under it, and it can be filled with water if desired – however I don’t, I just use them dry and put ducks on top of them.

Speaking of – the ducks

In the course of building the first iteration of the feendenkooi and training the dogs on it, I realized I was having trouble with them turning around. If they were working with live ducks and turned around to face them, the ducks would immediately leave. I thought it might help training if I could show them the reason I didn’t want them to turn and face the wrong way. I realized that meant I needed to put something in the “water” that had a front and a back end.

My first overambitious thought was to get real ducks. That was quickly nixed for likely obvious reasons. I briefly tried stuffed animals, but they looked too much like toys.

I went on Craigslist and found a set of 6 dirty old duck decoys for $25. I trained the dogs to approach them only from behind, and gradually progressed to “approaching from behind + not near ducks”, and then added in “approach from behind + completely ignore.” The dogs never got rewarded if they looked at or approached the fronts of the duck decoys from any distance. The decoys then get distributed along the “water” in a more separated manner than a flock would behave in the wild, but they need to be all along the course to remind the dogs of the direction in which we are working. In the future I’d like to try adding a pulley or two and have a second person control their movement with a string to make them follow the dogs.

The pond and the kooi

I use a baby pool at one end to create the “pond” and a storage tote at the other end to create the “kooi” which is the cage or trap the ducks end up in at the very end. Neither of these is really necessary, but I believe they help the dogs differentiate between the ends of the pijp, and thus which direction we are working towards.